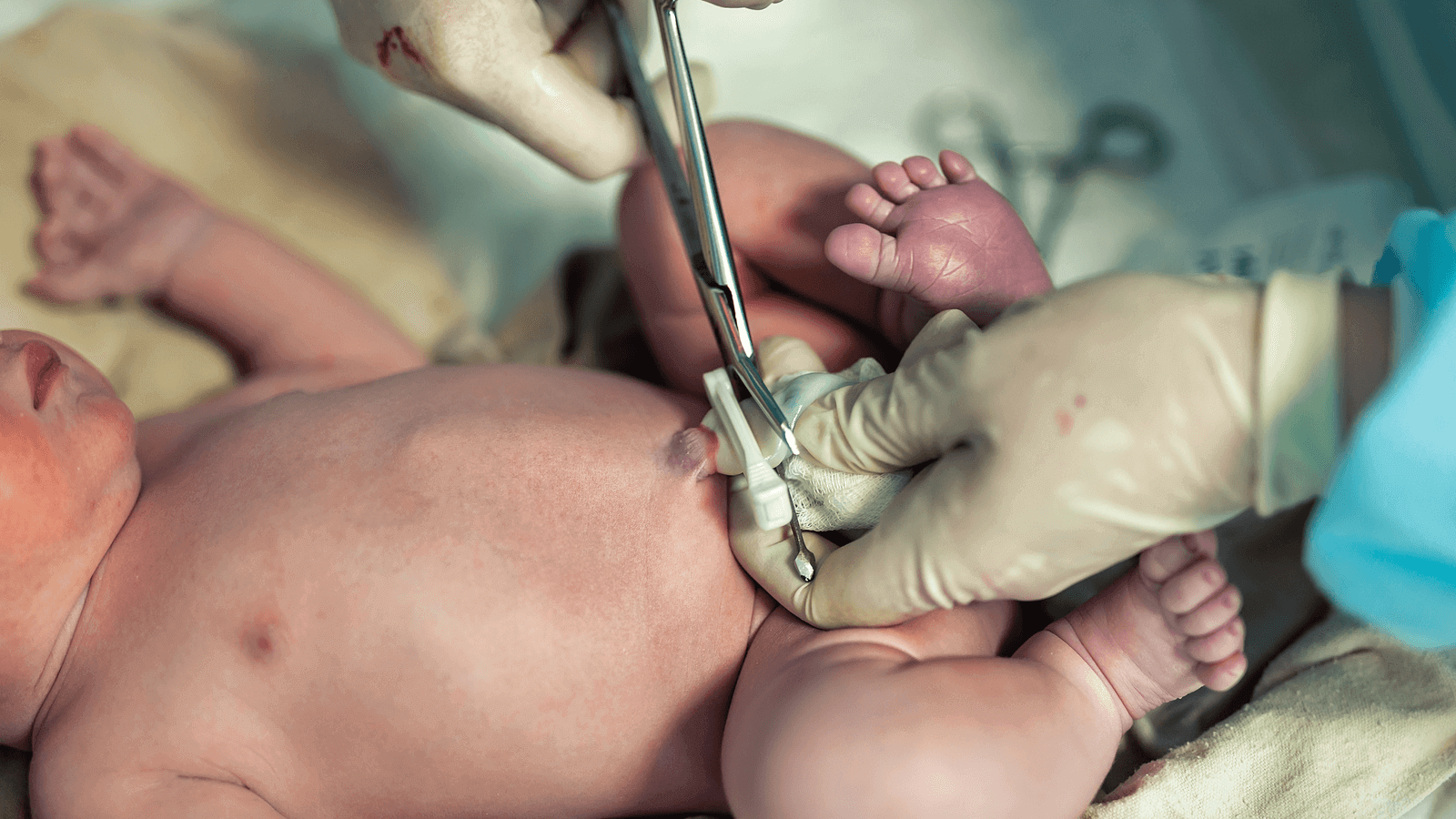 What is delayed cord clamping?

Several studies show the benefits of delayed cord blood clamping. In a study, delayed umbilical cord clamping among infants born before 32 weeks of gestation was associated with improved motor function at 18–22 months corrected age. There was a study conducted in 2018 where 73 infants who either underwent delayed cord clamping for an average of nearly 3 minutes or immediate cord clamping within 30 seconds found increased iron levels and myelin content (white matter) in the delayed group. The increase in myelin was found in regions associated with motor, visual and sensory functions and may lend support to the findings of the earlier study.

When fetal hemoglobin’s red blood cells break down, they form bilirubin. Bilirubin can be harmful to the developing brain. The extra blood provided by delayed cord clamping can increase jaundice levels in babies because some develop problems with bilirubin. So delayed cord clamping may slightly increase the number of babies that need phototherapy treatment (also known as “bili lights”). With phototherapy, we put babies under an ultraviolet lamp to help break down bilirubin more quickly.

The American College of Obstetricians and Gynecologists (ACOG) in 2017 recommends a delay in umbilical cord clamping in vigorous term and preterm infants for at least 30–60 seconds after birth.

In full-term infants, delayed umbilical cord clamping increases hemoglobin levels at birth and improves iron stores in the first several months of life, which may have a favorable effect on developmental outcomes.

The SOGC (Society of Obstetricians and Gynaecologists of Canada) addressed the timing of cord clamping in their Clinical Practice Guideline, as delaying the clamping of the cord by at least 60 seconds is preferred to clamping earlier in premature newborns (<37 weeks gestation). For term babies, they recommend caution about delaying clamping due to the possible risk of increased jaundice requiring phototherapy.

Today cord blood stem cells are used in transplant medicine, where a person’s stem cells or a donor’s stem cells are used to regenerate the patient’s blood and immune system. Currently, stem cell transplants can be used in the treatment of more than 80 conditions such as leukemia, lymphoma, sickle cell anemia, and some immune and metabolic disorders. Many clinical trials are underway worldwide investigating the use of cord blood as a treatment for conditions that currently have no cures, such as cerebral palsy, hearing loss, and autism. In many of these studies, the child’s cord blood or sibling’s cord blood is used for experimental treatment.

It is known that delayed cord clamping greatly diminishes the volume and Total Nucleated Cells (TNC) count of units collected for cord blood banking. Study shows that, found that a delay of 20-60 sec decreased the collection volume approximately 15%, thereby decreasing the fraction of cord blood units with a high enough cell count for public storage (defined as >1.25 billion cells) from 50% to 25% compared with units collected with no delay (<20 sec). In their study, delaying clamping even further to >120 sec, decreased the number of units with high cell counts to 14%.

Parents must weigh their priorities. Those families with an older child in need of stem cell therapy would likely make it a priority to obtain a transplant‐quality cord blood collection and prioritize this over delayed cord clamping. Especially in preterm babies both delayed cord clamping and cord blood collection will be beneficial as they have a high risk of developmental disorders like cerebral palsy.

Currently, several clinical trials are underway evaluating the potential of cord blood as a treatment for this and related conditions. But clinicians and patients need to realize that the length of the umbilical cord, the size of the placenta, and the amount of cord blood varies greatly from infant to infant. That variation means some babies can undergo delayed cord clamping without any significant impact on the amount of blood available for banking while others may fall short. In this case, although delayed cord clamping reduces the cord blood available for banking, research has shown that the concentration of stem cells is higher in the cord blood of premature babies. Even a small volume of cord blood collected may have a higher than expected cell count can be of therapeutic value.

It is found in a study published in the International Journal of stem Cells, that PrepaCyte®-CB processing is the best method to ensure that parents can collect their baby’s cord blood stem cells and delay cord clamping. According to the study, PrepaCyte-CB is the only processing technology that was not affected by the initial volume of the collected unit, and recovery of both TNC and CD34+ progenitor cells was as efficient with smaller volumes as it was with larger units.

While there is promising research in stem cell therapy and cell expansion technology, health care providers and expecting families are tasked to strike the balance in meeting immediate needs and future therapeutic potential for the newborns. LifeCell is the only cord blood bank that offers the Prepacyte cord blood superior processing technology in India and also offers stem cell expansion benefits. Ultimately, parents can choose delayed cord clamping together with cord blood collection.